Brain Health: Viruses and the Brain

Brain health – Researchers have known for some time now that neurological (brain) health can be affected by inflammation. Conditions seemingly unrelated, such as depression and Alzheimer’s, share this common contributory factor. Whether coming from the disrupted barrier function of our gut lining (“leaky gut”), suppressed immunity in the brain itself, or cytotoxicity aimed at neurons, microglia, and astrocytes (all brain cells), the result is inflammation. This is a major contributor to neuro-degeneration – seen in Alzheimer’s, Parkinson’s,  schizophrenia, depression, anxiety, and most other pathological brain conditions. In addition, there is more and more evidence that infections in other parts of the body, such as respiratory or urinary infections, can add to cognitive decline, whether these infections have been caused by viruses, bacteria, fungi, or  spirochetes, as in Lyme’s disease.

A chance remark made by Dr. Kara Fitzgerald discussing some clinical cases, made me look at the specific contribution of viruses to brain health. Once we are exposed to them, some viruses never leave the body, e.g. the varicella zoster virus that gives us first chicken pox and later on, shingles. They “lie low” and become activated again when we are immuno-suppressed, such as during times of stress. 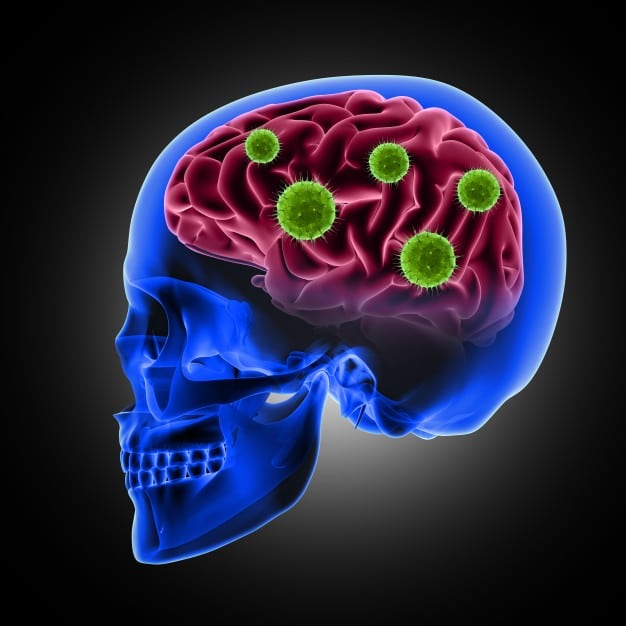 Other pathogens like bacteria can also cause viruses to come out of their hibernation and once they become active, they can cause inflammation via the release of compounds called cytokines.  In the case of  inflammation in the brain, immune cells called microglia will try and contain and kill the cause of the inflammation, but they themselves can become damaged in the process. Viruses can also attack ohther brain cells like neurons directly or cause them to commit cell suicide (apoptosis). Viruses like the herpes simplex virus (HSV) can cause cognitive decline and the destruction of neurons, while the Epstein Barr virus can lead to atrophy (shrinking) of grey matter in the brain.

Modern medicine often uses monotherapies (“one drug, one disease”) for neurological conditions like Alzheimer’s or depression.  This means that a drug like Aricept for Alzheimer’s will target one aspect of the condition, in this case increasing a specific neurotransmitter. In the case of mild depression, an example of monotherapy would be using one drug, e.g. sertraline or escitalopram that inhibits the re-uptake of serotonin, thus promoting feelings of well-being.

The therapeutic action of herbs

Recent research has shown, however, that in the case of the brain, a multi-factorial approach might be more successful (see the work of Dr. Dale Breseen on Alzheimer’s and Dr. Kelly Brogan on depression). This is where herbs and spices can be part of a person’s treatment protocol, along with exercise, sleep, and “mindfulness” approaches like meditation.

For me, the beauty of herbs and spices is that they have multiple functions that may ameliorate neuro-degeneration and improve overall brain health. Several herbs could both be anti-viral and anti-inflammatory at the same time. Furthermore, they can promote brain plasticity (the re-growth of neurons) AND simultaneously kill off the by-products of inflammation, called reactive oxidative species.

Herbs like astragalus, Chinese skullcap, St. John’s wort, licorice, and coptis chinensis all benefit our brains in slightly different ways. These are all anti-viral in their own right. Animals studies showed that astragalus protects neurons against toxicity, Chinese skullcap increases the number of neurons in Parkinson’s disease and improves cognition in dementia, while liquorice root can protect neurons from untimely death and harmful oxidants while improving cognitive impairment.

Of all the spices, curcumin in turmeric is perhaps best known and has been widely studied for its beneficial effects on brain health, mostly through its anti-inflammatory actions, but like the herbs mentioned above, it is also anti-viral. Similarly, both ginger and cinnamon have anti-oxidant, anti-inflammatory properties and again, both are anti-viral too.

My top tip for a healthy brain

Start in October through to March every year with a daily intake of some herbs, e.g. elderberry, echinacea, and liquorice to stave off the usual winter infections, and use spices like turmeric, cinnamon, and ginger on a daily basis. Your brain will thank you for it 😊